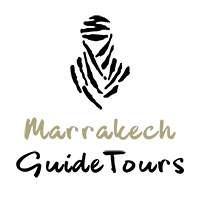 The Zellige – a Secular Moroccan Tradition 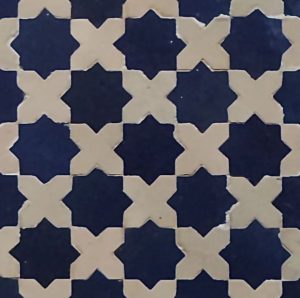 There is no better way to represent the intricate art of Moroccan decoration than a perfect blend of carved or painted wood and chiseled plaster or zelliges.  These Moroccan art forms are as old as the mosaicists – one of the pioneering race to have roamed the world.  Zellige is most likely inspired by the Roman and then Byzantine Mosaic, but the Moors brought the technique then in Andalusia.  With over ten centuries, they arrived at Fez by crossing the Strait of Gibraltar.  The pioneer shades to have matched with the zellige was white and brown, before its rapid development in the 14th century under the dynasty Mérinides with the use of blue, green and yellow becoming more prominent. 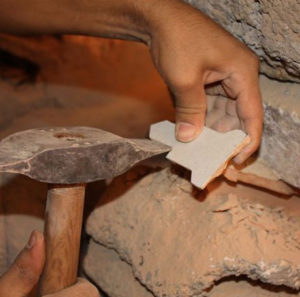 Even with the change in the associated colors, the primary uses of zelliges never changed, and till today, it is used in decoration and protection.  They are commonly found on the lower part of the walls (around 120 to 150 cm on the average), with drawings of multiple-colored rosettes from modest dwellings and gorgeous palace floors, pediments of the fountains, as well as the ceiling.  Two of the most attractive and extensive applications of zilleges are in the Royal Palaces of Rabat and Marrakech. 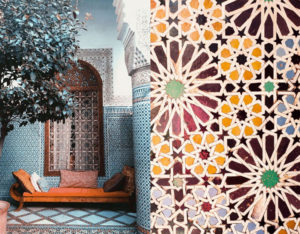 Zellige is often an indication of the rich secular tradition of the Moroccan people.  It is mainly made in the region of Fez, from clay and clear shades.  The tile measures about 10 x 10 cm and is covered with enamel.  Its astonishing dexterity, adjustable size, angles, and finer joints are all achieved by using a very sharp and heavy hammer – the menqach.

These pieces are then arranged, like a puzzle game, to form a pattern that follows the rules of Islamic art.  Thus, you will find several types of traditional motifs in Morocco, from the most chiseled to the most refined and more.  The meticulous task of beating the tiles into shape is always done in the dark – with the pieces, already covered in enamel, laying against the ground, before being sealed by the mortar, and then plated on the wall.

In the end, you have a gentle reflection of the light on the enamel, highlighting all the subtle nuances and continuously overflowing with the imaginations of these creative artists.

“To Travel is to Live” – Hans Christian Andersen